Mark Williams is a professional foraging teacher based in Dumfries and Galloway who runs sessions on how to identify, collect and use wild foods. I joined a session he was running as part of the Wigtown Book Festival where we concentrated on the harvest available in late summer/early autumn along the shoreline.

I joined a group of 11 other keen but novice foragers on a rather driech day at Garlieston Bay just over an hour's drive from Kirkennan. Garlieston is famous as the place where the floating Mulberry harbours were tested in preparation for D day as the conditions were considered to be similar to Normandy. More importantly for our purposes its sheltered location within the largest salt marsh in Scotland means that the littoral area is a real larder of foragable foods. As Mark pointed out, our ancestors until fairly recently would have considered this area to be important to supplement their diets, providing a range of edible seaweeds, plants and berries. 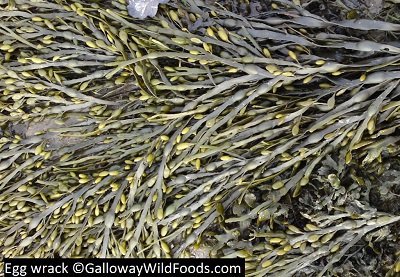 We started with seaweed. As Mark rather reassuringly told us any clean seaweed in the UK that is still growing and can be collected whilst on foot, is safe to eat - though not all of it may taste particularly pleasant. We started with egg wrack and spiral wrack which both had tips that were OK to nibble. Apparently you can pickle the tips if you can be bothered. What I found much more alluring was the idea of adding either kind of wrack to a hot bath.

Egg wrack is said to be the 'darling of the cosmetic's industry' whilst bathing in spiral wrack is reputed to help arthritis and weight reduction amongst other marvels. Mark advised being generous with the quantities, so next time I go to the beach I'll take a carrier bag to gather the ingredients for my luxury seaweed bath. Afterwards the wrack can form a useful mulch on the garden. The three different seaweeds we tried next were much more exciting tastes to my mind. The green slimy substance is known as sea lettuce. It clearly gets its name from the colour and shape rather than texture and taste. It is alright to nibble on but comes into its own when dried when it takes on a rich deep umami flavour that can be used as a seasoning or a crisp or for sushi. Mark had some dried samples in his pack which we all tried out.

The hairy one is Wrack Syphon Weed. This has a rather unpalatable texture (Mark calls it mermaid pubes - which may well put you off trying it. It certainly has the shape to get easily stuck between teeth). But again it has a rather marvelous taste and is more politely referred to as sea truffle. It is again best used dried and then ground. I collected some of this to bring home and am looking forward to using it as a seasoning.

The seaweed which looks rather like brown celophane is one of the famous lavers - there are actually a number of varieties but all are edible and are used in similar ways. This is again dried before use and can be powdered to form another great seasoning. It is the key ingredient of laver bread.

One of the delights of foraging with Mark is that he keeps pulling things out of his rucksack for us all to sip or nibble. We started the walk with a cup of elderflower champagne which was delicious and prompted me to want to try making it again. I make elderflower cordial every year, but the only time I tried making elderflower champagne it tasted disappointingly vinegary. I shall try Mark's recipe next year. After we had nibbled on the seaweed we had picked up from the shore and tasted a few grains of his dried sea lettuce Mark provided us each with a piece of his home baked laver bread. Now of course I have heard of laver bread, but I sort of supposed it was rather like bread with seaweed in it. In fact it is made from oatmeal and is a totally different texture and is far more interesting than I had imagined. Indeed this is another recipe I intend to try out. I think it would be rather nice with one of our free range chicken or guinea fowl eggs on top. We then moved on to some of the edible plants that can be found on the sea shore. Sea Aster was probably my favourite out of the things we tried. It can be eaten from April to October. When we were looking in late September the flowers were a bit bedraggled and past their best but the leaves (the edible part) tasted delicious. Sea Aster flowers have purple petals and a yellow centre and look somewhat like a garden michaelmas daisy (they are related, though apparently the garden version is not very palatable). The wild Sea Aster is very much a taste of the salt marsh and is salty, sweet and tender all at once. Nibbling it on a walk is a good way to enjoy it, but Mark also recommends adding it to stir fries and salads. Something I intend to try.

Scurvy grass is a plant you want to eat in moderation. It belongs to the mustard family and has a very strong flavour reminiscent of wasabi. Apparently it's name comes from its high concentration of vitamin C and the fact that it can be found year round so sailors used to use it to ward off scurvy - they must have been rather desperate to want to eat this in large quantities.

Sea radish comes from the same family as the garden radish, and just like the garden radish its leaves are quite pleasant with a sharp flavour. I don't find garden radish leaves particularly good steamed but do enjoy them fried in olive oil with a bit of onion and bacon and I think these would work well the same way. You can also eat the young seed pods of sea radish which are exactly the same shape and flavour as those of the rat tail radish I grow in the garden specifically for its seed pods. The ones we tried were somewhat tougher than the ones I have in the garden but I think that was probably due to being quite late in the season. I would use these in salads or stir fries. The flowers can be added to salads. Leaves, pods and flowers all have a peppery radishy flavour. 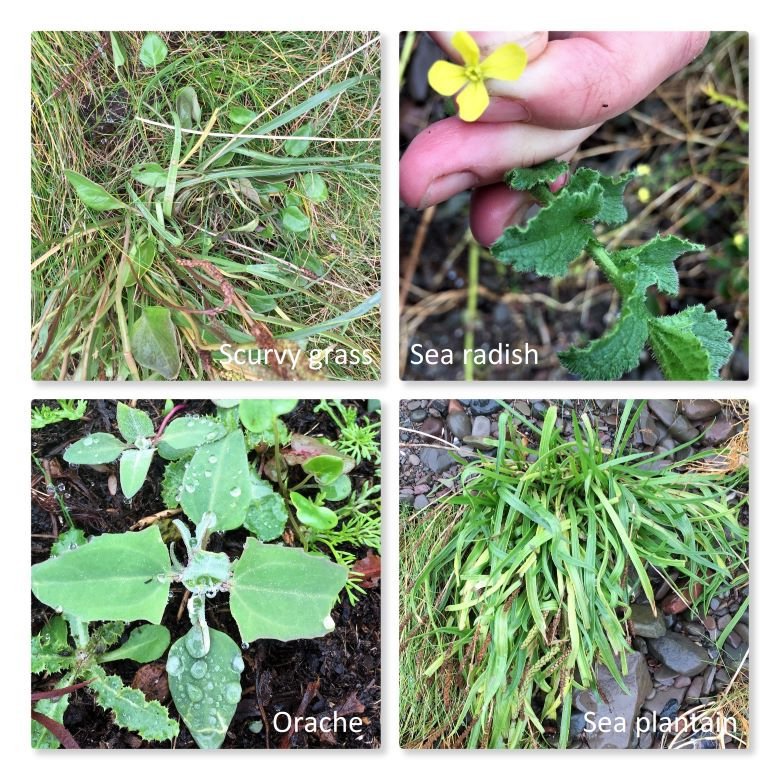 Orache is very similar to the tree spinach I once grew in the garden - which has self seeded ever since particularly in the polytunnel and keeps me in greens pretty much year round. Like the tree spinach, orache is best eaten young . I like to put it in a mixed salad or wilt it in a bit of butter.

The leaves of sea plantain were new to me. They are thick and fleshy with a salty taste. Recipe suggestions include adding late in a risotto, stirring them into noodles or steaming them as a green vegetable to eat with fish.

I am a great fan of samphire, but the patches I know in Dumfries & Galloway are rather sparce, so I was very pleased to be introduced to a substitute - Annual sea-blite. It can be steamed, pickled or stir fried in very much the same way as samphire and has a similar flavour and texture.

After a most enjoyable couple of hours wandering barely 100m along the coast and finding a plethora of wild foods - many more than I have mentioned here - we headed back to the start stopping only to learn that the seeds of the nettle (found only on female plants) are a mild stimulant. I collected and tried a few, but think rather a lot more would be needed to have a noticable effect. 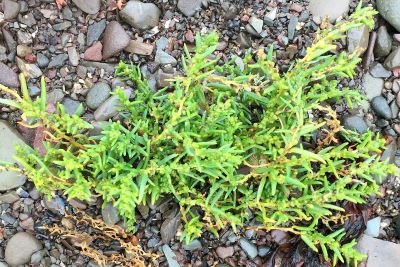 Pre-COVID Mark would end a foraging session with a joint cook up using ingredients collected during the day. Currently that is not possible so he provided us each with a delicious pack of pre-made delicacies made from wild foods. This included wild garlic pesto, local smoked venison served with dried crab apple garnish, wild mushroom pate, pickled chanterelle mushrooms and lacto-fermented wild garlic. I particularly enjoyed the latter and intend to try making it next spring when we will have an abundance of wild garlic at Kirkennan. 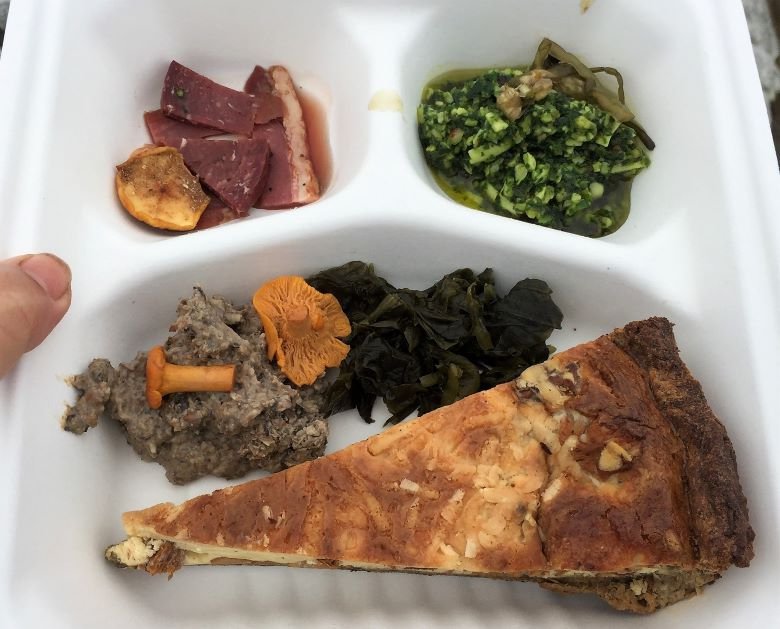 I can't think of a more enjoyable way to spend an afternoon than to go on a foraging session with Mark. It is both informative, fun and theraputic. Mark says his main purpose in educating people about foraging is to help connect them to nature and in that he surely succeeds. I highly recommend joining one of his events whilst on holiday as a great way to connect to the local area, but note they do seem to book up quickly. Alternatively you can book a private session. Why not do it early in your holiday and then put your new skills to good use for the rest of the stay? All the kitchens at Kirkennan are well equipped and I can even lend you a dehydrator if you want to get really serious.

You can watch a video taken during our foraging session below.

Practicalities
Mark Williams of Galloway Wild Foods is a professional foraging teacher based in Galloway. He runs regular wild food events, offers online wildfood mentoring and is available to book for private sessions which can be wheelchair accessible. Dogs are welcome on private bookings and sometimes by prior arrangement on public ticketed events. Mark is fully COVID compliant and has carried out a risk assessment and taken mitigating steps meaning he is able to take out organised groups foraging under current restrictions.
Wear outdoor clothing suitable for the weather at that time of year (it rained through most of the session I went on) and suitable footwear. Mark's website is a veritable treasure trove of information and recipes - highly recommended for a browse on days when you can't get out to forage.

I run Kirkennan Estate Holiday Cottages with my husband Michael Bourdages. I have long had an interest in foraging although I am no expert and want to develop my knowledge further. Every year I make elderflower cordial and use vast amounts of wild garlic - both elderflowers and wild garlic can easily be found at Kirkennan in the spring. In the autumn mushrooms, including ceps, can be found in Kirkennan woods over the road from the Estate . Shaggy parasol mushrooms also appear regularly in the greenhouse - they make great soup though are said not to agree with everyone. For more about our cottages please see the links below.

Accessible cottage that sleeps 5 plus up to 3 dogs.

Detached cottage sleeping 5&2 and welcomes up to 3 dogs.