The red squirrels at Kirkennan delight all who see them. But red squirrels in Dumfries & Galloway are under threat. Here we describe how we try to take care of them and how you, as a visitor, can play your part.. 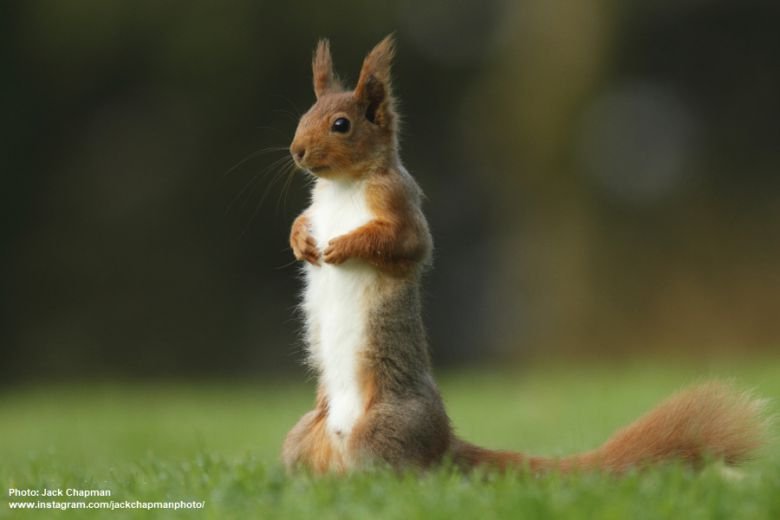 There is an thriving population of red squirrels at Kirkennan; recent guests have counted at least 7 different adult squirrels and possibly an additional two juveniles. At this time of year they are particularly active and can be seen in the beech and oak trees collecting mast and acorns then burying them on the lawns. They are also frequently to be seen on the feeder in front of The Mews and on the ones by the photography hide in Jock's wood. 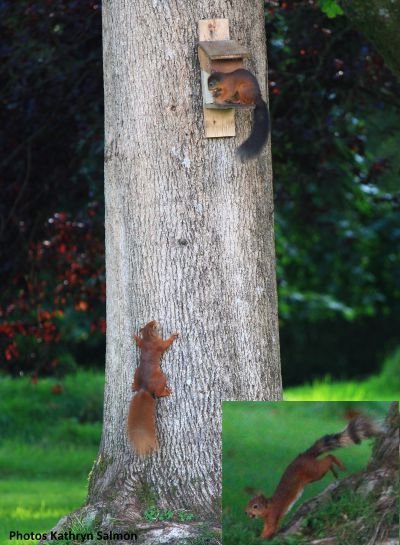 The red squirrels are a delight to watch. A bit of patience can reward with being able to recognise some different individuals by their colouring or tail patterns. You can also start to identify which red squirrels are more dominant and get first go at the feeders, chasing away other contenders.

This composite of photos taken by a recent guest, Kathryn Salmon, shows the differences between a dark coloured red squirrel, a light coloured one and a red squirrel with a pattern on its tail. All photos were taken on the lawns outside The Mews.

Red squirrels in the UK and Dumfries and Galloway

The number of red squirrels in the UK has fallen from an all time high of around 3.5 million, to a current estimated population of around 120,000; most of this remaining population being in Scotland. Since 2011, Saving Scotland's Red Squirrels has been monitoring populations in the parts of the country where they are thought to be most under threat. The 2017 results show that in Dumfries and Galloway red squirrels are still doing well but there are increasing records of grey squirrels moving into the area. 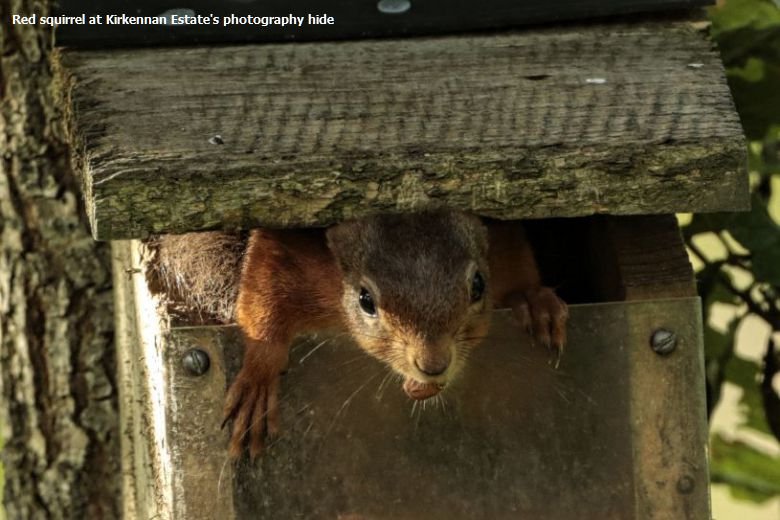 The threats to red squirrels in Dumfries and Galloway

The introduction of the grey squirrel from America in the 19th Century is the main reason behind the sharp decline of red squirrels in the UK as a whole. The greys outcompete red squirrels for food , particularly in mixed and broadleaf woodlands. In 2018 grey squirrels were reported in Dalbeattie woods and near New Abbey with one reported sighting in Palnackie.

The most signficant threat to reds from grey squirrels the virus which causes squirrelpox. Grey squirrels have immunity to this, but can be carriers and thus can introduce the pox to a local population of red squirrels with devastating results. Recent squirrel pox outbreaks have been recorded near Lockerbie, Thornill and Moffat. The squirrel pox virus is usually fatal to red squirrels, killing them within 15 days. If caught early enough a vet may be able to treat infected squirrels, but success is rare. Quarantining sick red squirrels may, however, help prevent transmission to other red squirrels.

Symptoms of squirrel pox include lethargy, skin ulcers, lesions and scabs and swelling near the eyes, mouth, feet and genitalia.

Another danger faced by red squirrels is being run over whilst crossing the road. In 2018 we have found one body along the A711 outside Kirkennan. We have put up signs to request drivers to look out for red squirrels on this section of the road.

What we are doing to protect red squirrels
At Kirkennan we are following advice from Saving Scotland's Red Squirrels to protect our local population. This includes: 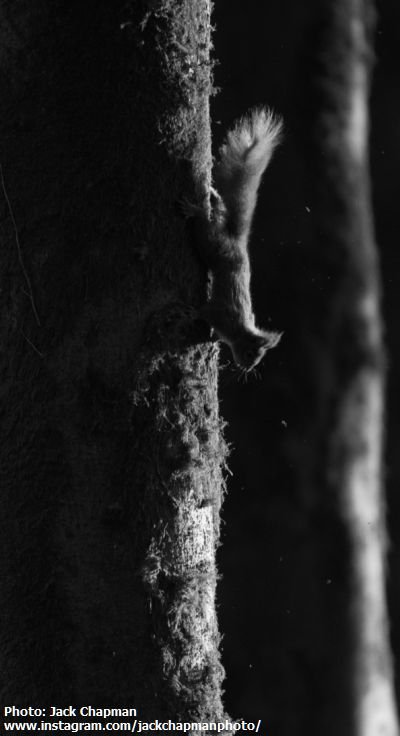 Update July 2020: The red squirrel population at Kirkennan is starting to recover after a devastating bout of squirrel pox in the area in spring 2019. There are now 3 red squirrels regularly visiting the feeders near The Yard and the Spruce wood.
If you want to be kept up to date with how red squirrels at Kirkennan are faring then sign up for our newsletter which goes out approximately once every two months.

What you can do to help

As a visitor to Dumfries and Galloway you can help preserve our red squirrels by: 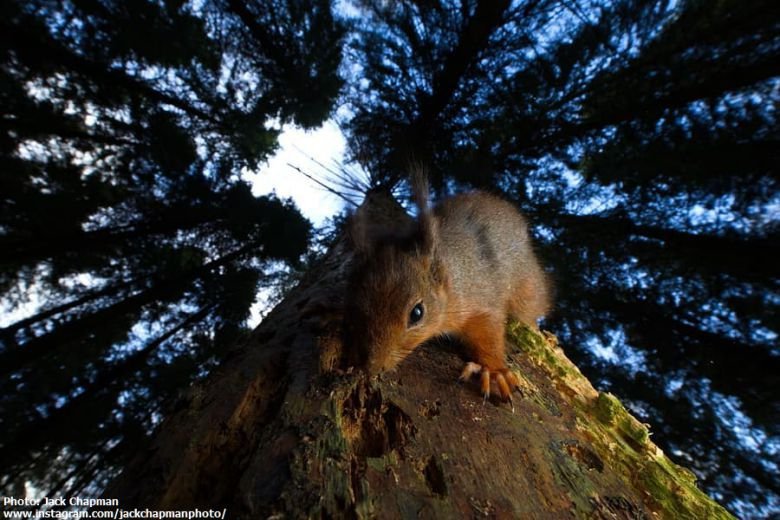 About the author:
Along with my husband Michael I manage Kirkennan Estate in Dumfries and Galloway, South West Scotland. One of my main interests is encouraging wildlife on the Estate and red squirrels are one of my favourite animals. If you would like to enjoy Kirkennan's red squirrels then please consider a holiday at one of our holiday cottages - details below.

The Mews holiday cottage sleeps 4 & 1. It looks out over Kirkennan Estate's landscaped lawns where red squirrels can often be seen. The photo shows two red squirrels on a tree outside The Mews.

The Lodge holiday cottage sleeps 5 & 2 and stands in a large enclosed garden where red squirrels do visit. This guest's photo of a red squirrel on the bird table was taken through the dining room window.

Woodsedge is our accessible holiday cottage. It is near both the Estate lawn where red squirrels are often seen and Jock's wood which contains the photography hide where this photo was taken. Woodsedge sleeps up to 5.