Carstramon Wood is an oak woodland over 200 years old famed for its bluebells. When the flowers are blooming in May is a great time to visit.... 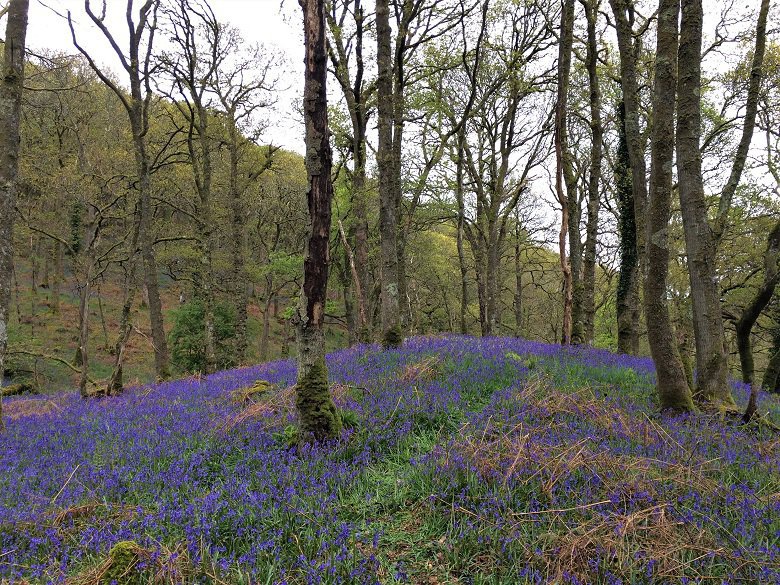 When my mother visited us in early May she was keen to see bluebells and the obvious place to take her was Carstramon Wood just north of Gatehouse of Fleet. This wood is beautiful all year round but it particularly renowned for its bluebells. The Guardian, The Independent and The Scotsman have all included it on their lists of 'top' places to see bluebells and our first visit certainly didn't disappoint. The slopes were carpeted with bluebells whose delicate scent was quite magical. In the main it was a mass of blue, but amongst this were the occassional white or pink bluebells - natural variations. 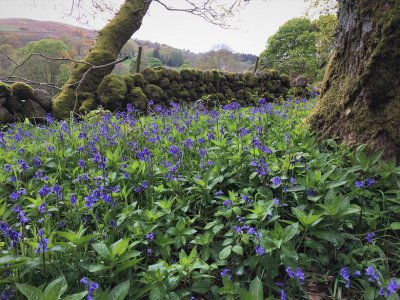 Carstramon is one of the largest oak woodlands in the Fleet Valley. According to the Scottish Wildlife Trust, who own the site, it is a good place to listen out for summer migrant birds such as pied flycatchers, redstarts, wood and willow warblers.

There are clear paths throughout the wood with an information board and map at the entrance.

The first bluebells in Britain are believed to have appeared after the last Ice Age. They like dense mature woodland as the thick canopy limits the growth of competing plants, though they can also grow in unwooded moist areas - indeed you can currently see them at the side of the Estate road at Kirkennan. They flower early in the spring before the canopy trees block the light and are an important source of early nectar for bees, hoverflies and butterflies. 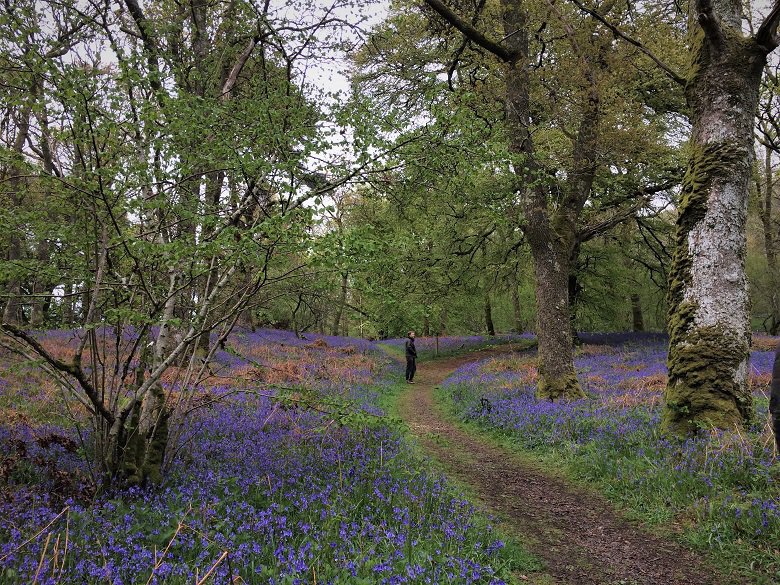 Bluebells take time to establish with it taking between 5 and 7 years between seed to flower and thrive in a stable well established habitat such as an ancient forest. Carstramon clearly suits them well; there has been woodland here for over 200 years. Maps from 1747 show the woodland restricted to Doon Hill but this was extended with planting of oaks in 1800 and from around 1830 these were being cut and turned into charcoal for using in smelting. The woodland today covers approximately 83 hectares.

Bluebells (Hyacinthoides non-scripta) have long had a place in people’s imagination as shown by their many names including wood bell, bell bottle, Cuckoo’s Boots, Lady’s Nightcap and Witches’ Thimbles. In some places they are called ‘fairy flowers’ as according to an old myth bluebells were used to summon fairies to their gatherings. If humans heard the bells they would soon die. In other places it is said that wearing a wreath of bluebells compels you to tell the truth. 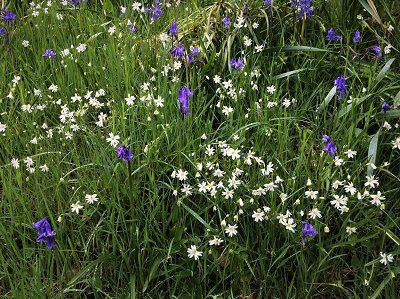 Historically their unique properties have led them to be used for a variety of tasks: their sticky sap was used as a glue to fasten flight feathers to arrows and during Elizabethan times the bulb was crushed to make starch to stiffen ruffs. Their medicinal qualities are now being researched as a potential treatment for cancer; they contain a number of biologically active compounds to defend themselves from animals and insect pests and are poisonous to humans. Bluebells are one of the UK’s iconic flowers of Spring and almost half of the world’s bluebell population is found here. But like so much else they are under threat. Loss of habitat is one concern, another is The Spanish bluebell (Hyacinthoides hispanica) which was introduced as a garden plant by the Victorians. Unfortunately it cross pollinates with our native flower to produce fertile hybrids which can put our delicately scented bluebell woods under threat. There have been concerns that cross breeding between native, Spanish and hybrid bluebells could lead to the native bluebell's extinction - though recent research questions this. It has been estimated that one in six bluebell woods now contains a mixture of bluebell species. I didn't notice any at Carstramon but I have seen both Spanish and hybrid bluebells in other woods in Dumfries and Galloway. You can do your part to preserve bluebell woods:

-Don’t pick bluebells. This is in any case illegal without the landowner's permission. In particular it is an offence to pick or uproot bluebells for commercial purposes.

-Keep to the paths and take care not to trample bluebells as they can take years to recover. Trampled bluebells can even die from lack of food as crushed leaves cannot photosynthesise.

Do not plant Spanish bluebells in your garden and remove any that are growing there. The easiest way to tell native bluebells from hybrid or Spanish ones is to look at the pollen; if creamy white it is native, if any other colour then it is Spanish or a hybrid. Dispose of bulbs carefully so you don’t end up spreading them. Putting them in the compost is not a good idea! The Berkshire, Buckinghamshire and Oxfordshire Wildlife Trust have a useful guide with more information on how to tell the two apart.

To get to Carstramon take the B796 north from Gatehouse-of-Fleet. After approx. 3 miles turn right along a narrow road we could not see any sign to Carstramon woods at any point but this was the first real road right. This road passes over a bridge over the Water of Fleet then comes to a T-junction. Turn right here and parking is available almost immediately in laybys to the side of the road. There is a map at the main entrance and a number of clear paths through the woods some of which are steep and possibly muddy. Bluebells are visible from the start so those with limited mobility do not need to go far to enjoy them. There is a bench at the entrance.
Looking for other places to explore in Dumfries and Galloway? Take a look at our blogs on:
Raven's Craig Viewpoint
Torr Point
Mersehead to Southerness walk
Sandyhills to Kippford
If you are looking for accommodation in the area please use the links to our cottages below About the Author:
Jennifer Chapman is co-owner of Kirkennan Estate Holiday Cottages in Dumfries & Galloway - a great base for nature lovers and walkers to enjoy all that the area has to offer. For more information about our cottages please see the links below.

A cozy holiday cottages that sleeps 4&1 in a king sized double and a twin/triple room. 3 dogs welcome free of charge.

Our largest cottage that sleeps 5&2 in 4 bedrooms. 3 dogs welcome free of charge.

A level access cottage suitable for those with limited mobility. Sleeps 5. 3 dogs welcome free of charge.