Dumfries and Galloway harbours a diverse range of landscapes for birdwatching, it is possible to reach excellent upland, woodland and wetland habitats all within a relatively small geographical area. However, autumn and winter are undoubtedly times when the wetlands and coastal marshes come into their own.

Dumfries and Galloway lies on the north shore of the Solway Firth, one of the largest areas of intertidal habitat in the UK. Every autumn tens of thousands of wildfowl and waders arrive to feed and rest on the mudflats and coastal grasslands. Highlights include: the entire Svalbard population of 40,000 Barnacle Geese mostly spends the winter in a relatively small area of the inner Solway; around 10,000 Pink-footed geese from Iceland and Greenland winter along the coast; and, the awe inspiring spectacle of starling murmurations. In addition, whooper swans, large numbers of ducks and waders accumulate on the saltmarshes in the autumn. While further out to sea, divers and sea ducks collect in large rafts.

While it is possible to find great birdwatching throughout Dumfries and Galloway, there are some sites and reserves that particularly stand out and are especially worth a visit.

RSPB Ken-Dee marshes - This is probably the best spot to find the Greenland White-fronted Goose flock that winters in the Ken/Dee valley. It is also a good spot to view woodland birds including resident willow tits. Red kites are abundant in the area and they can often be seen from the reserve.

Threave marshes – Most well-known for its breeding ospreys it is also worth a visit in autumn and winter. This can be a good spot to look for the white-fronted geese if you do not have any luck at Ken-Dee marshes. 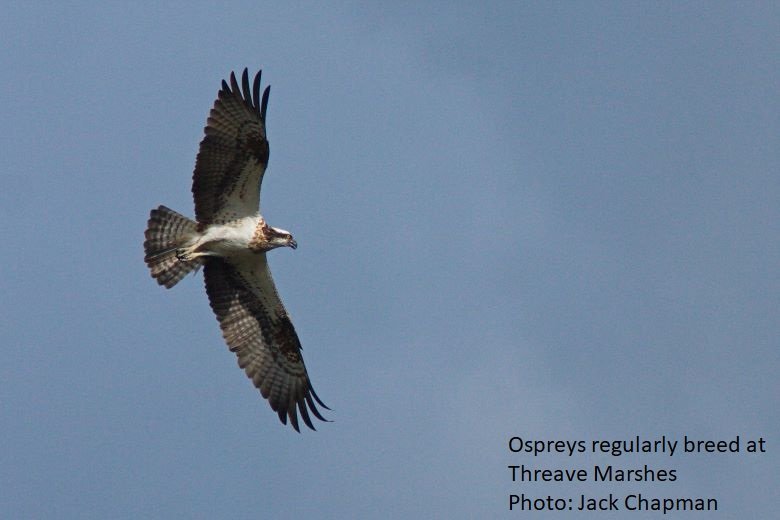 Carsethorn and Southerness – Carsethorn is another good spot to view waders and ducks. A raft of Scaup winters along this stretch of coast and other wintering ducks can occasionally be seen. The rocks around the lighthouse at Southerness are worth searching for purple sandpiper.

RSPB Mersehead – The wintering grounds of large numbers of barnacle geese, pink-footed geese, pintails and various waders. It can also be a good place to see small flocks of wintering finches and buntings. In the last few years, it has hosted a good-sized starling murmuration. Raptors are not an uncommon site in the autumn and winter, marsh harriers, peregrines, merlin all put in appearances. 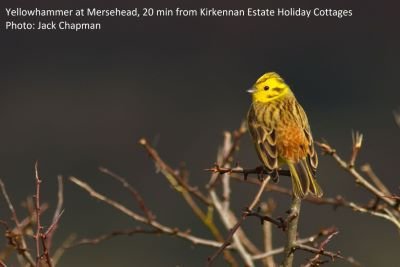 Caerlaverock WWT and NNR – These are actually two reserves adjoining each other. Large numbers of barnacle and pink-footed geese winter here. The WWT feeds wintering whooper swans here throughout the winter. There is a good chance for birds of prey here and the large areas of saltmarsh and rough grassland favour hen harriers and barn owls. 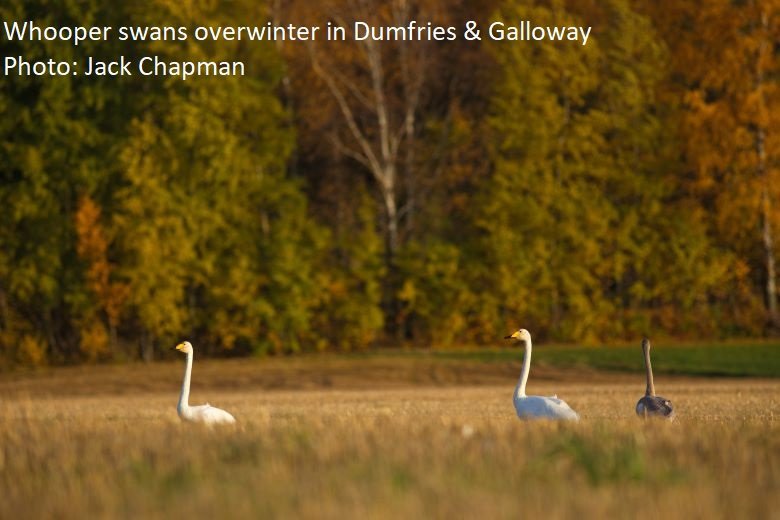 Bellymack Hill Farm - A red kite feeding station. The sight of 100 swirling and diving kites is not to be missed. Feeding time is 2pm.

Corsewall Point and Loch Ryan – Divers, grebes and sea ducks are present in the sea loch through the autumn and winter. Corsewall point is an excellent spot for sea watching in the autumn. Petrels, skuas and shearwaters are regularly seen here, particularly when strong north-westerlies are blowing.

Wigtown Bay – The mudflats and saltmarsh host large numbers of wintering geese and waders. There is a LNR and RSPB reserve.
Portpatrick – Another good sea watching spot. Quite tame black guillemot breed in the harbour here, outside the breeding season they can typically still be seen just offshore.

The three cozy cottages on Kirkennan Estate being centrally located along the Dumfries and Galloway coast are perfectly situated to easily reach great birding sites to the east and the west, only 20 minutes by car to Mersehead, Ken-Dee Marshes, Threave Marshes or Bellymack Hill Farm and less than 45 minutes to Caerlaverock.

The 74 acres of the estate itself can also be an excellent place for birdwatching straight from your cottage door, or even from the window. The property bounds the Urr Water, still strongly tidal at this stretch. The river and surrounding fields host reasonable numbers of ducks and waders. The sound of teal piping and wigeon whistling on a blustery day is one the most evocative soundscapes that really must be experienced. Goldeneye, shelduck, kingfisher are all regular sightings along the river. While further upstream beyond the Dalbeattie bridge, dipper and grew wagtail are present. 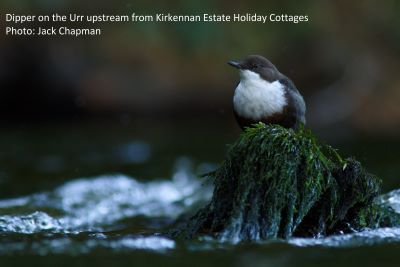 The estate also harbours a diverse array of other bird habitats. The woodland is a mix of coniferous and deciduous and young and mature woodland. With the leaves gone, winter can be one of the best times to view resident woodland bird species, flocks of tits with goldcrests mixed in can be seen easily in the canopy as they search for food. One of the best places for woodland bird viewing in the winter is the bird hide in Jock’s Wood, where feeders act as a major draw in these months. Meanwhile, great flocks of siskin are often present wheeling between the trees right outside the cottages that make up the stable block during the winter months. They seem to have a particular taste for the Western Red cedar seeds. 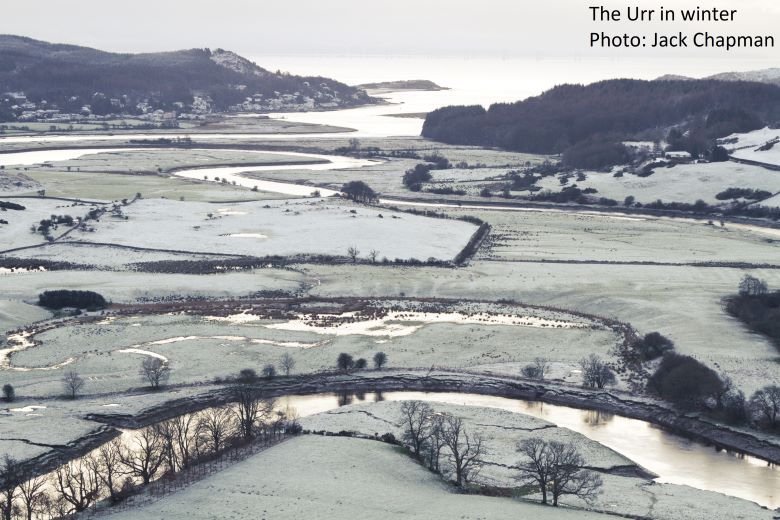 Autumn and winter are also the best times to see raptors and owls on the estate. Tawny owls are very prominent on the grounds and are particularly vocal in the autumn as they stake out new territories. The spruce wood by the north gate is a good place to find them, though naturally they are more often heard than seen. Barn owls are intermittent visitors to the estate, the best chance to see them is in the areas of new woodland or along the rough grassland by the river. Buzzards, red kites, kestrels, sparrowhawks and raven are all fairly regular visitors and occasionally peregrines show up too.

In addition to birds, the autumn and winter months can also be good for mammal watching. The resident red squirrels are particularly active in the autumn and can be seen collecting beech mast and visiting the feeders regularly. There is an active badger set in the 14 acre Jock’s wood. Badgers are not as active during periods of harsh weather, but they can still be seen throughout the year. The best chance of a sighting is by walking quietly in Jock’s wood after dusk. Otters are present on the Urr water, their tracks are regularly seen on the exposed mud along the river at low tide. Sightings are rarer but it is always worth scanning the river with binoculars from the riverside hut or bench. Roe deer are easily seen for the early riser and are often present in Jock’s wood or in the woodland along the river at dawn. In the autumn they transition to their grey winter coats in which they look particularly handsome. Brown hares, foxes and stoats are all occasionally seen on the estate. 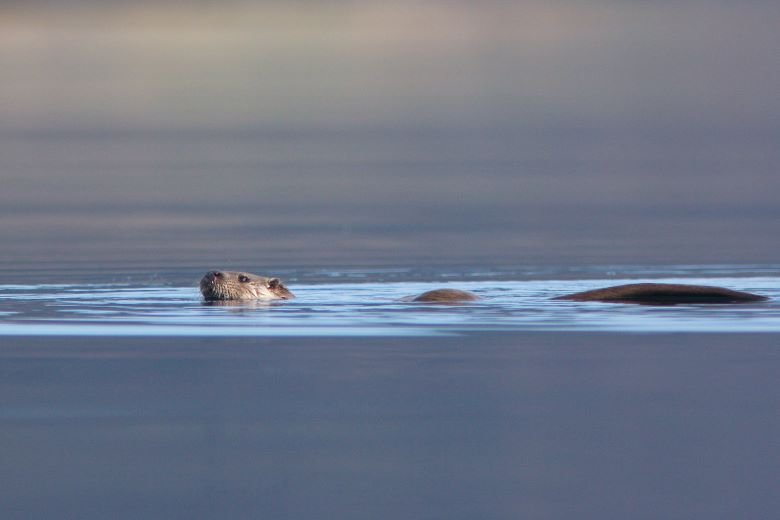 Kirkennan Estate’s three self-catering cottages, The Lodge (sleeps 5&2), The Mews (4&1) or Woodsedge (accessible, sleeps 5) are well equipped for a comfortable birdwatching base in Dumfries & Galloway. They are all fully centrally heated but also equipped with a woodburning stove, perfect for getting comfortable in the evenings after a day spent in the elements. 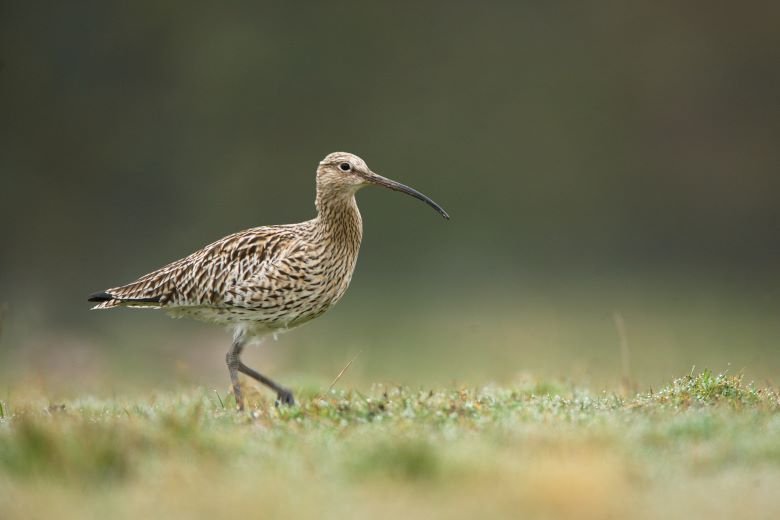