A lovely walk along the Solway Coast with seabirds to view, and fossils to find, ending up at a memorial to those leaving Scotland for the New World and a unique pub... The walk starts at Southerness, a holiday village on the Solway Coast with great views. Southerness is just off the A710, the coastal road between Dalbeattie and Dumfries - about half an hour drive from Kirkennan. It is a unique place with a rather unusual mix of old cottages and new holiday developments. When I first visited I assumed that the cottages used to belong to fishermen, but a little research indicated that they were built as accommodation for miners in the 1770s by Richard Oswald of Auchencruive who was convinced there was coal to be mined in the area - it seems he was wrong. Subsequently the village has had a considerable history as a sea bathing resort. It has been suggested that the name of the location was originally Saulterness (Salt Makers Point) indicating a past where saltpans were used to extract salt from seawater to use for preserving food.

The most striking building in Southerness today is the particularly fine 18th Century lighthouse, one of the oldest in Scotland, which predates the village. It was built in 1749 to warn ships of the dangerous rocky outcrops on the route to Dumfries and was operational until the 1930s. It stands approximately 56 feet tall. It is occasionally open in the summer months. 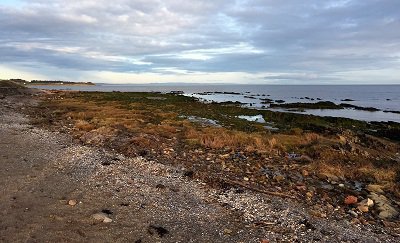 This landmark indicates the start of our walk which heads along Gillifoot Bay, the shorefront to your left when facing out to sea (eastwards).
This shore and local merse are frequented by seabirds, particularly in winter when the winter migrants arrive. On our walk we saw and heard Curlew and Oyster Catchers. Other likely winter sightings include Barnacle Geese, Ringed Plover, Teal, Widgeon and Shelduck.

If you look inland you will see views of Criffel. This is not a particularly high hill, but it is distinct and qualifies as a Marilyn, "a hill of any height with a drop of 150 metres or more on all sides". Remember also to look back the way you have come towards Southerness lighthouse which can be seen in the distance. On a clear day, if you look out to sea, you can see the mountains in the Lake District on the other side of the Solway Firth. 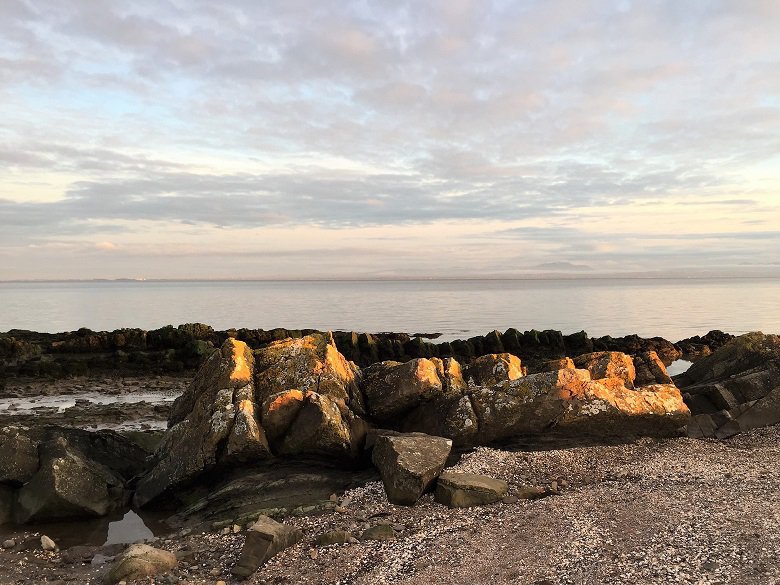 After walking along the coast for about an hour you will come to the secluded Powillimount Beach. This has a car park next to it so is an alternative option for starting/ending the walk. It is a fun beach to visit with kids who will enjoy its rock pools, shells and dramatic rock formations. See if you can spot the enormous granite boulder that looks out of place. According to local lore this was spat out by the devil after he took a bite out of Criffel then decided he didn't like it. An alternative possibility is that it was deposited by glaciers during the last ice age. 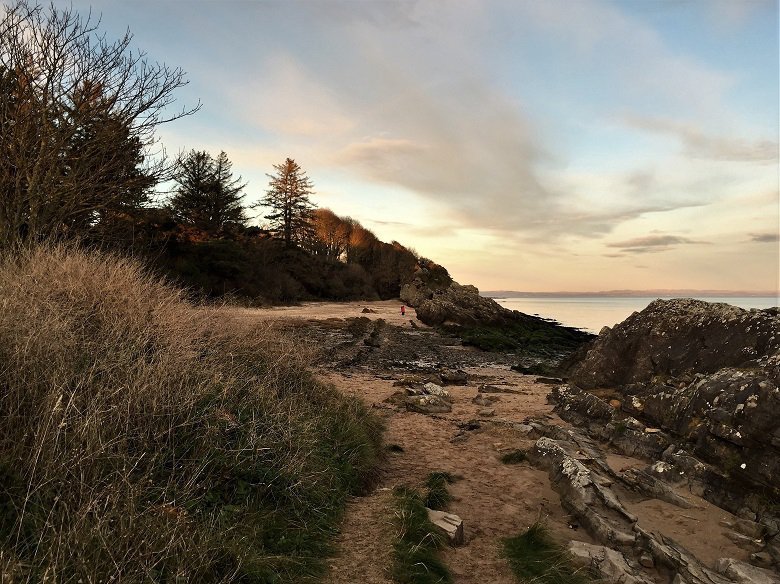 If the tide is out you can pass through the rock arch at the end of the beach known as the Thirl Stane and continue along the shoreline. 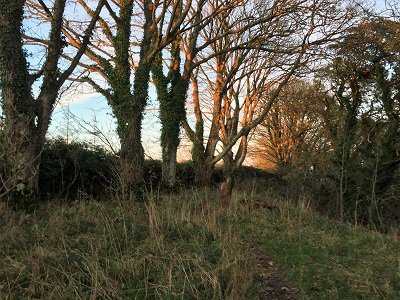 When we visited the tide was on the way out but to continue along the coast we would have had to clamber over very wet and slippy rocks so instead we took the inland route. The path for this is at the far end of the beach and takes you up to a line of trees.
Another alternative if you have caught the tide wrong is to leave the shore at the carpark take a route quite a lot futher inland along quite roads. I haven't tried this but the route is explained here.

After a while you will return to the shore. Look out for the House on the Shore, an arts and crafts style dower house built in 1936. 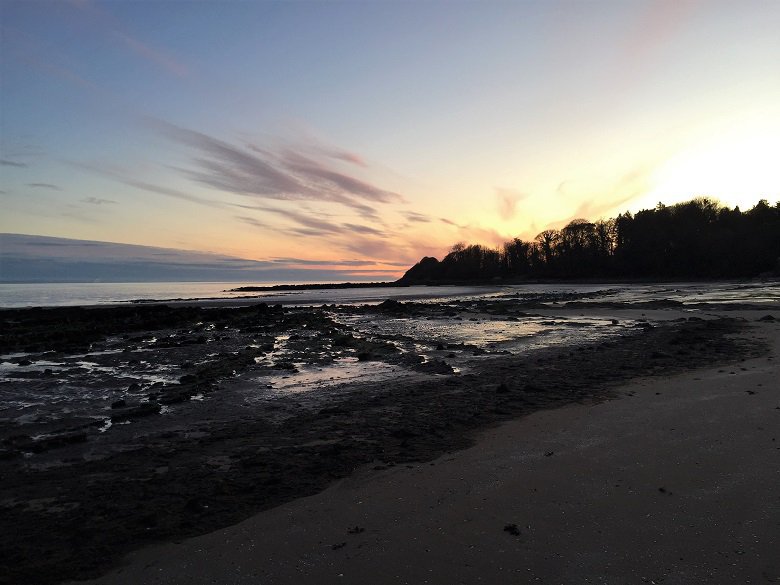 The rocks on the beach in this area are rich in fossils which are easy to spot if you take some time to look (it was getting a bit dark by the time we got there). According to one report I read the kind of fossils found on this side of the Solway indicate that 400 million years ago it was near the current equator. This was long before the land masses of Scotland and England collided, so presumably the fossils on the English side of the Solway are quite different.

From the House on the Shore you pass around Borron Point and then Hogus Point before reaching Carsethorn.

As long as the tide is out this is an easy walk along the beach, with a number of fossil rocks to investigate enroute. 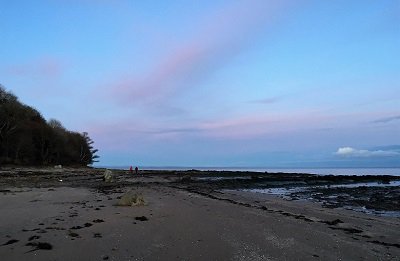 If arriving at dusk as we did, you can leave the beach when you see the welcome lights of the Steamboat Inn. It is hard to imagine now but in the 18th and early 19th centuries, Carsethorn was a busy port with regular sailings to Ireland, Liverpool and The Isle of Man. By the shore here you will find a memorial to the 21,000 people who left Scotland from this point to search for a better life in the New World. 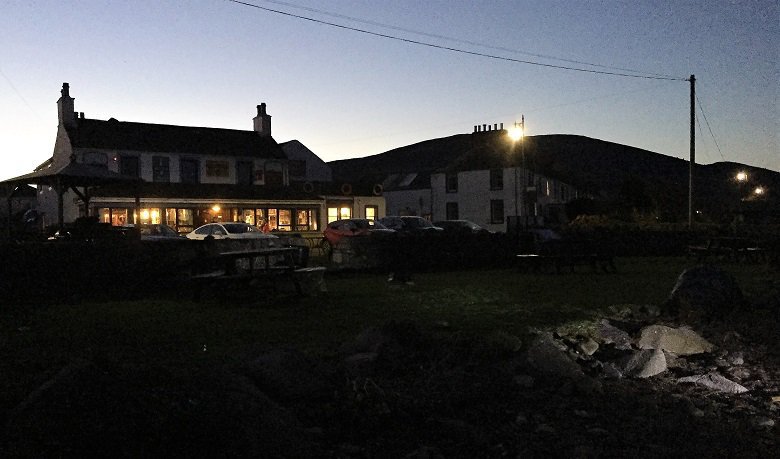 This is a fairly level walk of approximately 5km but as it is along the beach it is not suitable for pushchairs or wheelchairs. Dogs can be off the lead for most of the walk. Some of it is not passable at high tide so do check tide tables before heading out. Good footwear is advised.

There is free parking and public toilets at Southerness and Carsethorn.

You can find a map of the route from the Dumfries Core Route website. This downloads best in two sections: Southerness to Powillimount and Powillimount to Carsethorn.

I fell in love with the Solway Coast when I moved to Dumfries & Galloway 6 years ago wtih my husband. Together we run Kirkennan Estate Holiday Cottages, a compact Estate of 74 acres with landscaped gardens, woodland and river bank. We welcome outdoor lovers to our 3 comfortable holiday cottages - to find out more please use the links below.

The Mews sleeps 4&1 in a king sized double and a twin which can be set up as a triple bedroom. It welcomes up to 3 dogs.

Woodsedge has level access throughout and sleeps up to 5 in a double, a twin and a single bedroom. It welcomes up to 3 dogs and has an enclosed garden.

The Lodge sleeps 5&2 in a king sized double and a twin on the ground floor with an upstairs single with another attic bedroom that can be single or twin. It has a large enclosed garden. 3 dogs welcome.