A magical place that in the 17th century provided a safe haven for Covenanters and in the 18th inspiration for poets and writers, now largely forgotten except by the occasional photographer. 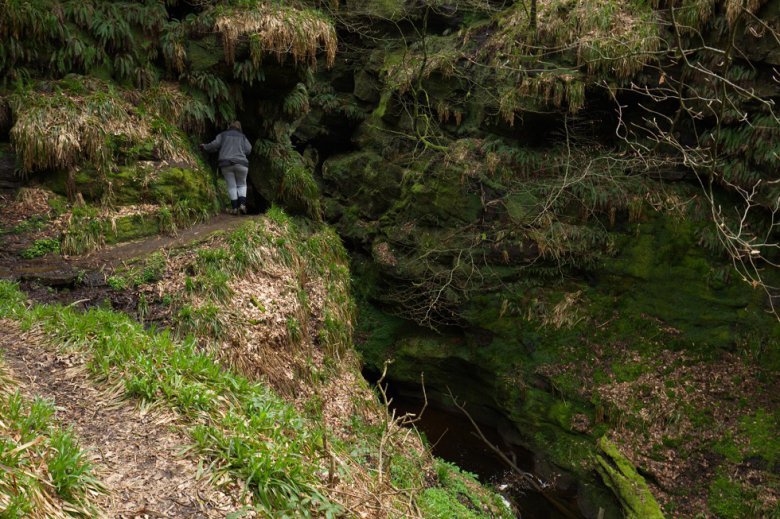 If Crichope Linn was anywhere other than Dumfries and Galloway it would probably be a major tourist attraction. Instead it appears little visited – the two times I have been we had the place to ourselves. The paths which were extensive in the past are no longer maintained and the six bridges which used to span the river at the most picturesque spots have long since disappeared. To my mind this adds to the charm of this hidden gorge, though it does mean you have to approach some areas with care and young children and dogs will need very careful supervision. Crichope Linn is more accurately a gorge formed by the action of the stream which in places has worn away the soft red sandstone into a cleft over 30 metres deep containing some wonderful rock shapes and structures. The sides of the ravine are so close together that you would not know it was there when viewed from a distance, making it an ideal hiding place.

When you enter the wood from the gate by the road there is no sign of what is to come. The path and stream are beautiful, but fairly standard fare for the numerous lovely woods in Dumfries and Galloway. But soon the lush greenery and fantastical shapes of the rocks covered in liverworts, mosses and other damp-loving plants will start to make it clear why Crichope Gorge was reputed to be a home for elves and other supernatural beings.

Shortly you will come to the remains of a natural cave that used to stand at the entrance to the gorge. This was known as the Elf’s Kirk (church) or sometimes the Covenanters Cave as it made a good hiding place for Covenanters to hide when they were being sought out during the notorious ‘killing times’ of 1638-88 – without local knowledge no-one would suspect the cave of being there.

The Covenanters were a movement of Scottish Presbyterians who objected to claim of the Stuart Kings’ to be the spiritual heads of the Church of Scotland; to them only Christ could be that. Shortly after Charles 1st of England tried to impose the Book of Common Prayer in Scotland and declared that refusing to use it would be treason, the National Covenant of 1638 was drawn up in opposition to this. Copies of the Covenant were sent around Scotland and numerous people signed, particular in the lowland areas – these people became known as the Covenanters.

Citizens who refused to attend their local church could be fined and would be ordered, sometimes under torture, to declare their loyalty to the king and to accept him as head of the church. Failure to do so could lead to summary execution. This repression lasted from 1638-88 and is known as the ‘killing-times’, during which it is estimated that around 18,000 people were killed, often without any judicial process, with many others tortured or imprisoned. 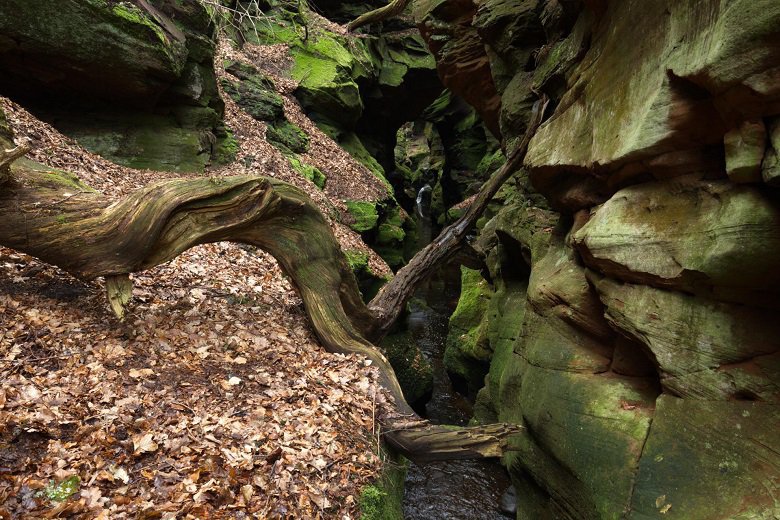 Unfortunately the easy accessible rock forming the Covenanters Cave proved too tempting to break up for building materials and was carted away leaving behind only a sandstone rock face where it used to stand. You can find some carved graffiti on this rock from early tourists, some if it said to date back to the Covenanters times.

The Linn has a number of evocative names linked to it showing its importance in local folklore and oral history. After the remains of the ‘Elf Kirk’ see if you can spot ‘Hell's Cauldron’ where the water ‘boils’ in a deep circular ‘cauldron’ carved out by its action. Shortly after is ‘Burley’s Leap’ where it is purported to be possible to leap across the gorge – this is not recommended! A natural red sandstone bench is known as 'Souter's Seat', reputed to be named after a shoemaker who once hid here and carried on his trade with other 17th Century Covenanters who found this a convenient place to go to ground.

You soon come to a fork in the path. The right hand will take you up to a natural archway almost hidden amongst the ferns. This provides a good viewpoint of the waterfall and gorge beyond and has wonderfully contorted pillars just too tempting for visiting graffitists. It has clearly been a visitor attraction for centuries and you can find many 18th and 19th Century inscriptions. Walk carefully as it can be quite slippery and do not let children or dogs go ahead of you as the path looks like it could continue a little way but is really quite unsafe.

Crichope Linn was a popular and quite famous place to visit in the 18th and 19th Centuries and was selected as one of the ‘Beauties of Scotland’ in Robert Forsyth’s popular publication of 1805. Robert Burns (1759-1796), who lived locally at Ellisland farm for 3 years, certainly visited and is said to have carved his name on the rock arch though I was unable to find it. 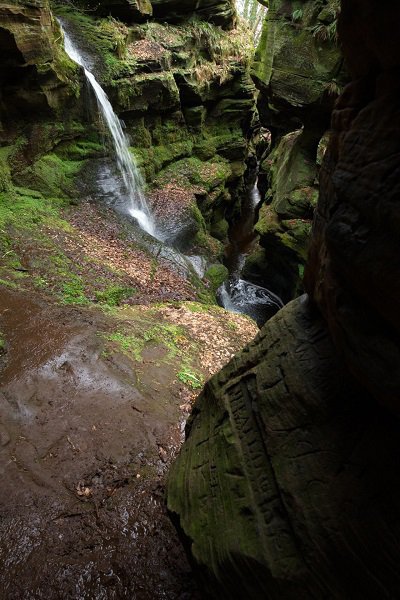 Walter Scott (1771-1832) explored Crichope Linn whilst visiting his brother who attended the nearby Wallace Hall School in Closeburn and found it intriguing. He used it as the inspiration for the Black Linn of Linklater in his novel "Old Mortality", where it was one of the hiding places for the outlawed covenanters, in particular John Balfour of Burleigh, a character based on John Balfour of Kinloch, who gave his name to the ‘Burley’s Leap’ upstream of the Souter’s Seat where he was said to have leaped across the gorge to escape his pursuers.

Thomas Carlyle, (1795-1881) the Scottish Historian and writer lived in the local area for several years and made many visits to Crichope Linn which he captured in his poem Crichope Linn Loquitur Genius Loci

To continue up the stream retrace your steps to the fork in the path and take the left branch. Here you can see some well-made steps which give some indication of the infrastructure that was here in the past. When you get to the top of the little rise it is worthwhile taking the right fork in the path on the other side to go down to the water’s edge on the far side of the waterfall. Here is what I assume is known The 'Gullet Spout'.

After this the stream largely becomes more gentle though the path remains difficult at times. In early spring the banks are covered in wild garlic. 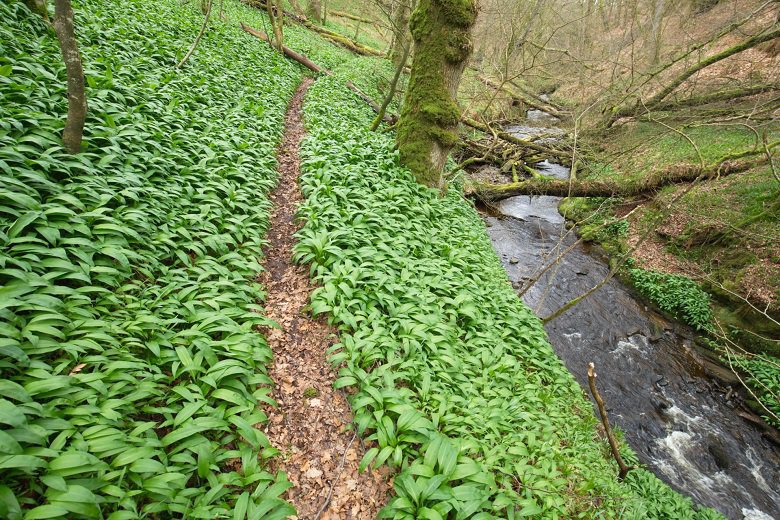 The first time I visited we walked right up the glen to where a farm road crosses the stream and then back down the quite country lane. The gorge and valley however is far more interesting than the lane so the second time I visited we just went up and down the same way.

Practicalities
Crichope Linn is found along the country road linking the hamlet of Gatelawbridge with Closeburnmill about 3km east of Thornhill. The entrance is marked by a small sign from the road and there is a parking area just to the North of it at 55.241451, -3.720689. The paths are reasonably easy up to the rock arch but after that are less defined and can be impeded by fallen trees. It can be very slippery particularly after rain with some sheer drop-offs onto rocks or into water so children and dogs need to be very carefully supervised. It is not suitable for those with limited mobility, push chairs or wheelchairs.
Map

About the photographer: Jack Chapman
All the photos of Crichope Linn were taken by Jack Chapman an award winning wildlife and landscape photographer currently studying in Finland.
About the author: Jennifer Chapman (who also took the rather amateur videos)
I moved to Dumfries and Galloway about six and a half years ago and together with my husband run Kirkennan Estate Holiday Cottages. We love the mix of wonderful landscapes and historic and literary links that Dumfries and Galloway has to offer; it is an exciting place to explore with always new things to find. If you are interested in visiting the local area and are looking for a place to stay then please do consider one of our 3 comfortable holiday cottages set within 74 acres of gardens, woodland and fields. We take bookings of 3+ nights starting any night. You can find details using the links below.