An exhilarating cliff top walk with far reaching views. One of my favourites…

The loop from Balcary Bay, along the cliffs to Rascarrel beach is a beautiful walk just a few minutes drive from Kirkennan Estate Holiday Cottages. There are three route options so you can choose a walk of different lengths. Or, if you don't like heights, you can miss out the cliff section alltogether - but then you would miss the section with the best views. 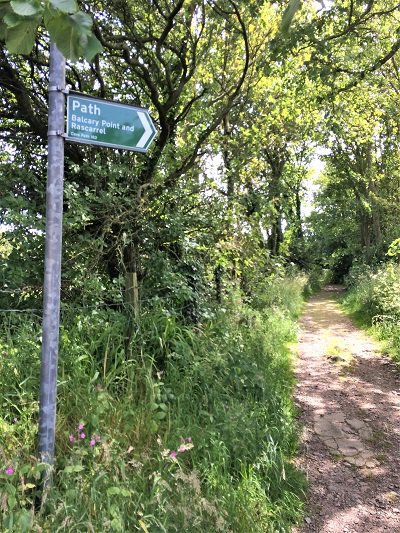 To find the start of the walk leave Kirkennan Estate by the southern gate near The Lodge and follow the coastal road south past the turn for Palnackie. Shortly before reaching Auchencairn take the road to the left marked Balcary Bay Hotel. This is a pretty road running alongside the bay but is single track so take it slowly and be prepared to pull into a passing place if cars are coming from the other direction.

Drive past the hotel and you will find a free car park just beyond. There is a rather old map showing the map route in the car park. To start the cliff route walk towards the beach but turn off before you get to it at the signpost shown in the photo.

This track will soon take you through a gate with an option to take a right fork if you want to miss the cliffs. We followed the main route straight ahead across the field with views across Balcary Bay as shown in the photo. Balcary Bay Hotel can be seen to the left. In the 18th Century the Solway was known for smuggling with luxuries such as tea, lace and brandy being landed illegally from the Isle of Man where import duties were much less. Large amounts of money could be made and the Balcary Bay hotel is said to have been built as a front to hide smuggling activities - apparently secret caves were found under the hotel. It certainly is an ideal location for such activities.

At the far end of the field a gate leads into a narrow path between trees. Look out for the well tended garden to the left and the old lifeboat house which is now a cottage.

To the left of the path you will find a bench. This must once have been a nice place to sit for views over Heston Island. However the shrubs have now grown too high so to get the view in the photo you need to stand on the bench - if you sit your view will be totally blocked.
In the 12th and 13th Century the monks of nearby Dundrennon Abbey were said to use Heston Island for fishing. Later it formed the retirement home for Edward Balliol, briefly king of Scotland and then became a smugglers' hide out in the 18th Century - a lot of history for a small island! You can find out more on the island's own website. 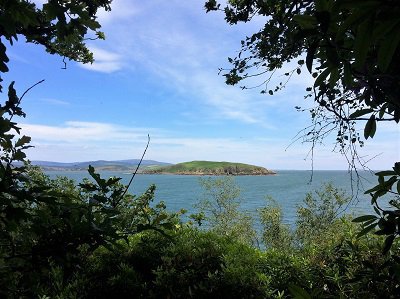 Shortly after the bench with this view the path leaves the trees through a gate. At first it is quite easy going but quite soon the path starts to go very close to the cliff drop off and you begin to get spectacular views both forwards and backwards and over the Solway towards the Lake District. 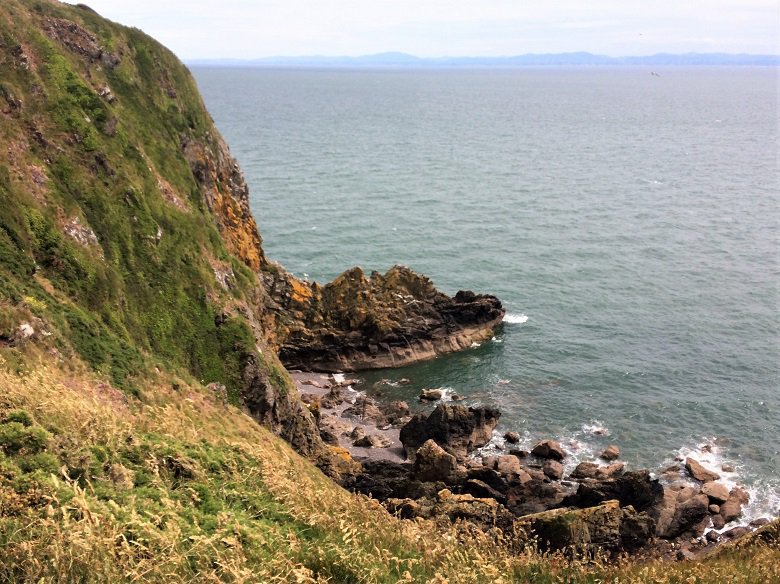 This is a beautiful walk at all times of year. The only time I might avoid it would be if there were strong winds, particularly offshore ones. 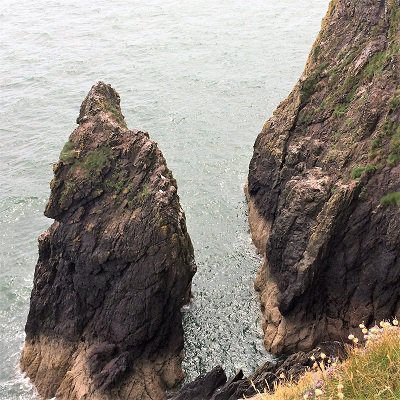 The cliffs provide breeding locations for Guillemots, Razorbills, Comorants, Fulmars, Kittiwakes and various gulls. If you are lucky you might also see seals, porpoises or dolphins. It is worthwhile taking binoculars.

I last did the walk in mid June when these photos were taken, and enjoyed masses of wild flowers. The sea thrift was coming to an end but had been replaced by what I think were two different types of march orchid, wild thyme and saxifrage. 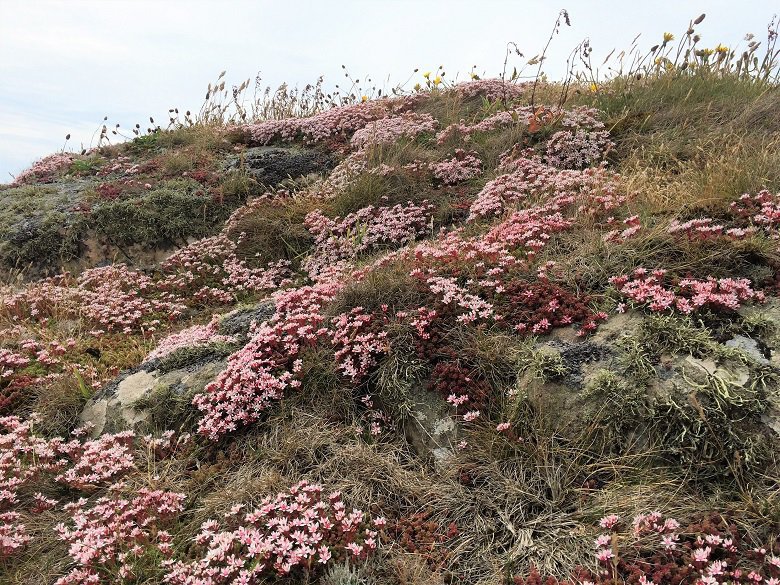 After the steepest cliffs you will come to a sign offering a choice of taking a path back across the fields to the carpark or continuing along the coastal route ahead which is now becoming more gentle. We continued along the coast. The path goes past a couple of well placed benches with great views - good places for a picnic or just a sit and a chat. It then starts to drop down into Rascarrel Bay and a possible location for swim on a hot day. 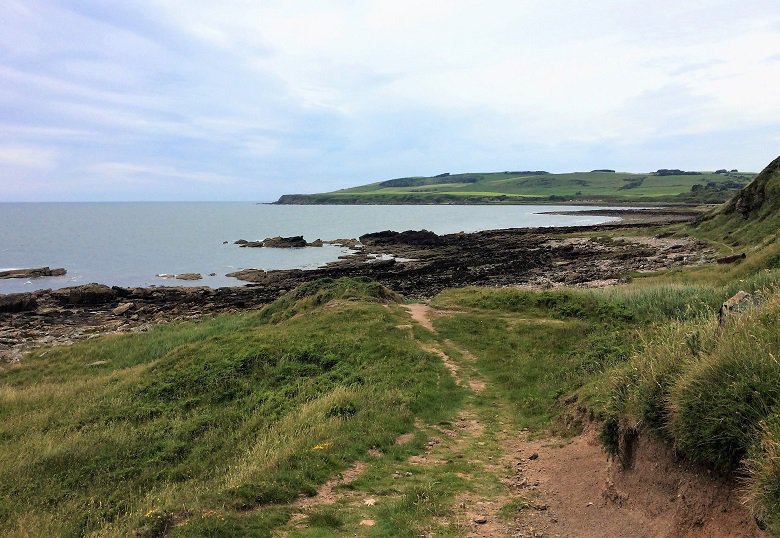 There are some cabins at Rascarrel Bay but you can access the beach via a gate in front of them. To loop back via the loch take the path that runs behind the first set of cabins. There is a clear track that leaves the sea behind and takes you inland to a loch. Here you turn right to take the track back through fields to the carpark.

We took 2 hours to do this route - walking quite slowly and stopping to enjoy the view. The walk is not strenuous but is unsuitable for people who are unsteady on their feet or have a fear of heights. Children and dogs should be kept under close supervision. It is not suitable for wheelchairs or pushchairs or mobility scooters. The carpark is about 10 min drive from Kirkennan Estate Holiday Cottages. A map of the route can be printed off from Dumfries & Galloway Council Core Routes website.

I run the 3 Kirkennan Estate Holiday Cottages with my husband Michael. I love walking and find that we are located in an area with a wide range of beautiful walks of different kinds. If you are looking for a good base for a walking holiday in South West Scotland then please take a look at Kirkennan. You can find out more about our 3 holiday cottages using the links below.

A cozy cottage sleeping 4&1 in 2 bedrooms.

A comfortable cottage sleeping up to 5 in 3 bedrooms.

Our largest cottage that sleeps 5&2 in 4 bedrooms.